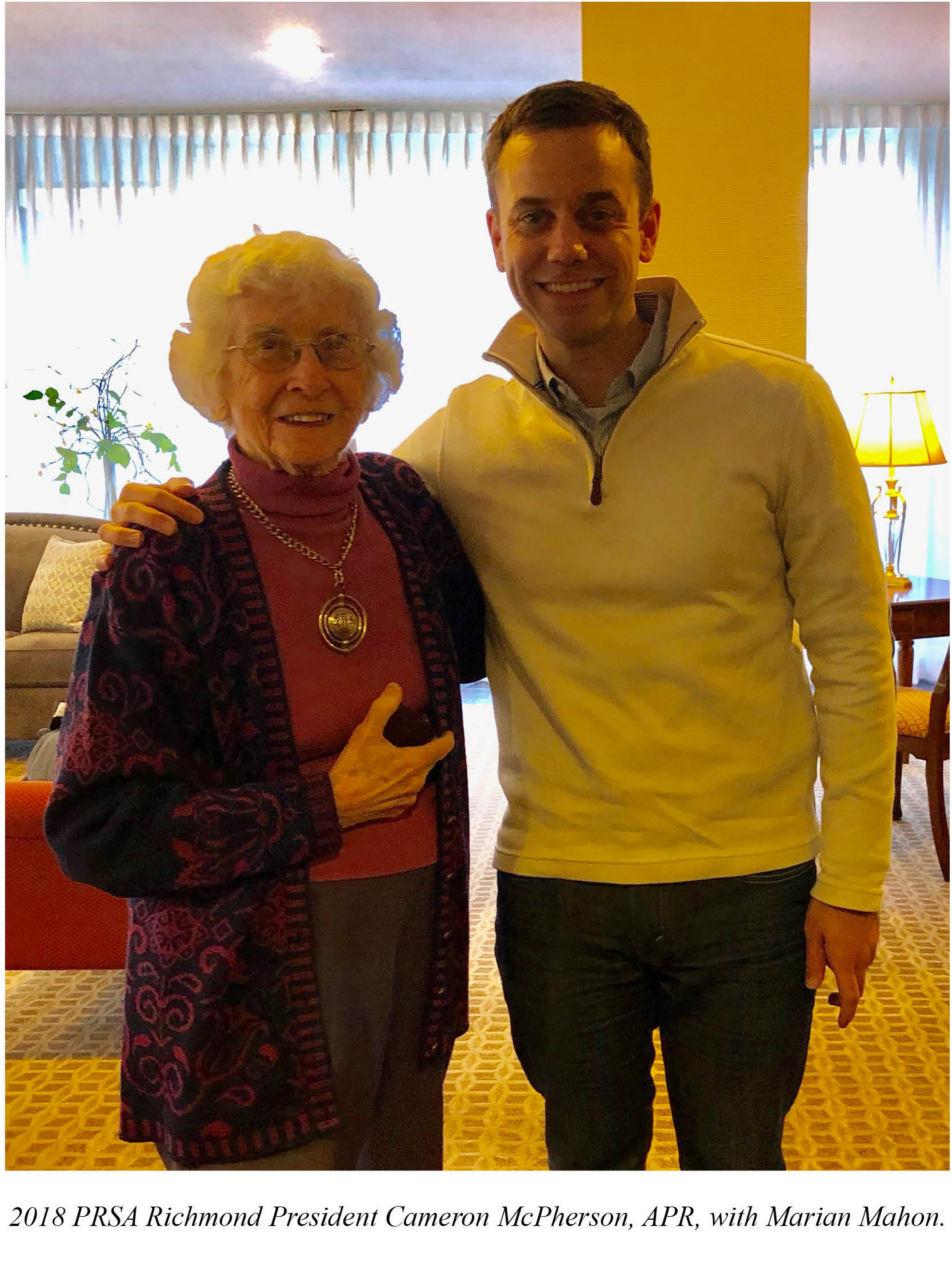 When Marian Mahon walked on stage to accept top honors for her work with the Richmond Red Cross chapter at the 17th Annual Virginia Public Relations Awards in 1968, Richmond Public Relations Association board members knew she could be a big asset to the professional group. A year later, she joined the RPRA board – now known as PRSA Richmond.

By the time Mahon became the chapter’s sixth female president in 1975, she had planned luncheons, programs and a statewide public relations conference headlined by Senator John Warner.

While Mahon displayed a natural talent for public relations – it wasn’t her chosen career path. But a mix of talent, tenacity and a few fortuitous conversations propelled her toward a fulfilling and impactful career.

“I wanted to study journalism. I didn’t even think of public relations to begin with,” said Mahon.

With two years at the Norfolk division of William & Mary (now Old Dominion University) under her belt, Mahon transferred to Virginia Commonwealth University to pursue a journalism degree and on her first day met her husband Charlie. She landed a job in the library at the Virginia Electric Power Company and, on occasion, wrote a few articles for the company’s publication to ease her itch for telling stories.

After a couple years at the library, Mahon leveraged her knowledge of electric power and transitioned to her first public relations job at Rural Electric Power Authority. A few years later, a chat during a bridge game would shape her public relations career.

“The gal I was playing with said, ‘I’m leaving my job and Marian, you ought to apply, it’s with the American National Red Cross. They need a public relations director,” remembered Mahon.

Mahon applied and was hired.

JUMPING HEAD-FIRST INTO THE RED CROSS

Within three weeks of beginning her new job at the Red Cross, Merchant’s Ice & Cold Storage Warehouse on Sixth and Byrd Streets exploded shattering windows across seven blocks of buildings. The Red Cross helped the injured and provided around-the-clock support to volunteers and emergency personnel for a five-day period. Mahon worked with local media to communicate about relief efforts. She would later help with responses to floods and other disasters across Virginia and beyond. Her bosses relied on her agility, smart thinking and rolodex of media contacts to get messages out.

Mahon maintained excellent working relationships with media across Central Virginia. In her role as Red Cross PR director, she would write news releases and then make copies to mail to newsrooms. If the news was imminent, she would pick up the phone and give editors a heads up. She remembers tailoring stories for different media outlets, depending on whether it was print, TV or radio, and keeping an organized and detailed media list that kept track of new and outgoing journalists.

Not only did media contacts help her raise awareness following disasters, but they also were a fundamental component of promoting Red Cross’ more community-focused initiatives that happened year-round. Under Mahon’s tenure as PR director, the Richmond Red Cross chapter launched a program called “Baby’s First Picture” which went on to become an award-winning effort that was replicated nationally. The Red Cross helped take pictures of newborns and sent them to serviceman in Vietnam to build connections back home.

Mahon also produced events like the local Red Cross chapter’s 50th anniversary event at Richmond’s Dogwood Dell in 1967. About 3,000 people converged on the public park’s lawn for a two-and-a-half hour celebration honoring the military and recognizing the Red Cross’ history. Richmonders listened to the patriotic sounds of the U.S. Continental Army Stage Band from Fort Monroe, the Atlantic Navy Fleet Band from Norfolk and the U.S. Marine Corps Band from Quantico while a narrator read from Mahon’s script. The successful work sent Mahon and other organizers to the Virginia Public Relations Awards a year later.

“This was my first entrance into the Public Relations Association, and we won the award for the non-commercial category,” said Mahon. “We were very pleased about that. That really cemented my relationship with the PR Association.”

Today, PRSA Richmond’s board meets at 10:30 a.m. directly before the monthly luncheon at the Jefferson Lakeside Country Club. In the 1960s and 70s, Mahon and her fellow board members gathered a week ahead of the luncheon at Mrs. Marshall’s Tea Room for planning.

The RPRA board sent out notices ahead of meetings, reminding people to put the luncheons on their calendars. Sometimes the board would also host phone call sessions, where they would gather to conduct follow-up calls to members.

As president-elect, Mahon planned the chapter’s luncheon speakers and organized the 27th Annual Virginia Public Relations Conference at the Boar’s Head Inn in Charlottesville in 1975. Entitled “Citizens Unite!” the two-day event attended by 300 public relations professionals featured a variety of speakers with a keynote from Senator John Warner who discussed the nation’s bicentennial activities.

“We were just very pleased to have him be the main speaker,” said Mahon.

A few months after the conference concluded, Marian received a letter from the RPRA nominating chairman Tom R. Fulghum stating: “Those of us on the nominating committee are delighted that you have accepted the office of President of RPRA for the 1975-1976 term. We are confident that you will continue to do the same outstanding job you have demonstrated in the past.”

Mahon went on to serve a successful year as president of the RPRA.

A CAREER NOT LIMITED BY GEOGRAPHY

While Mahon found success in the public relations field, her husband Charlie’s work in journalism also took off. When he was promoted to open the United Press International (UPI) wire service bureau in Roanoke, Mahon started a job with the local Red Cross chapter.

When Charlie was transferred back to Richmond a year later as UPI’s state manager, Mahon followed. While her job at the Red Cross was gone, she joined as a volunteer and took on freelance jobs secured through connections from her mentor Daphne Daily and relationships at the RPRA.

Mahon continued her freelance work for three years until the couple moved to Atlanta for Charlie’s position with UPI. Without her RPRA connections, Mahon went looking for work. One day, she noticed a large Red Cross symbol.

“I was just driving around Atlanta and saw a big Red Cross flag,” said Mahon. “I pulled into the parking lot and introduced myself to switchboard operator, and she asked, ‘Our PR director is upstairs, would you like to meet her?’”

They met. While no positions were available, she signed on as a volunteer to write the newsletter. The volunteer role didn’t last long: Before she could get the first issue out, the assistant PR director decided to leave her job. Mahon was hired to replace her.

Mahon and her husband made it back to Richmond a few years later, where she started volunteering with the local Red Cross chapter again and resuming her freelance work. The executive director re-hired her when the organization decided to put on a statewide conference. She stayed on until retiring in 1985.

After leaving the Red Cross, she supported fundraising efforts for the Bishop of Richmond for 12 years. She also began a decades-long volunteer stint with St. Mary’s Hospital. Every Monday for 35 years, she’s been at the hospital helping staff and patients. 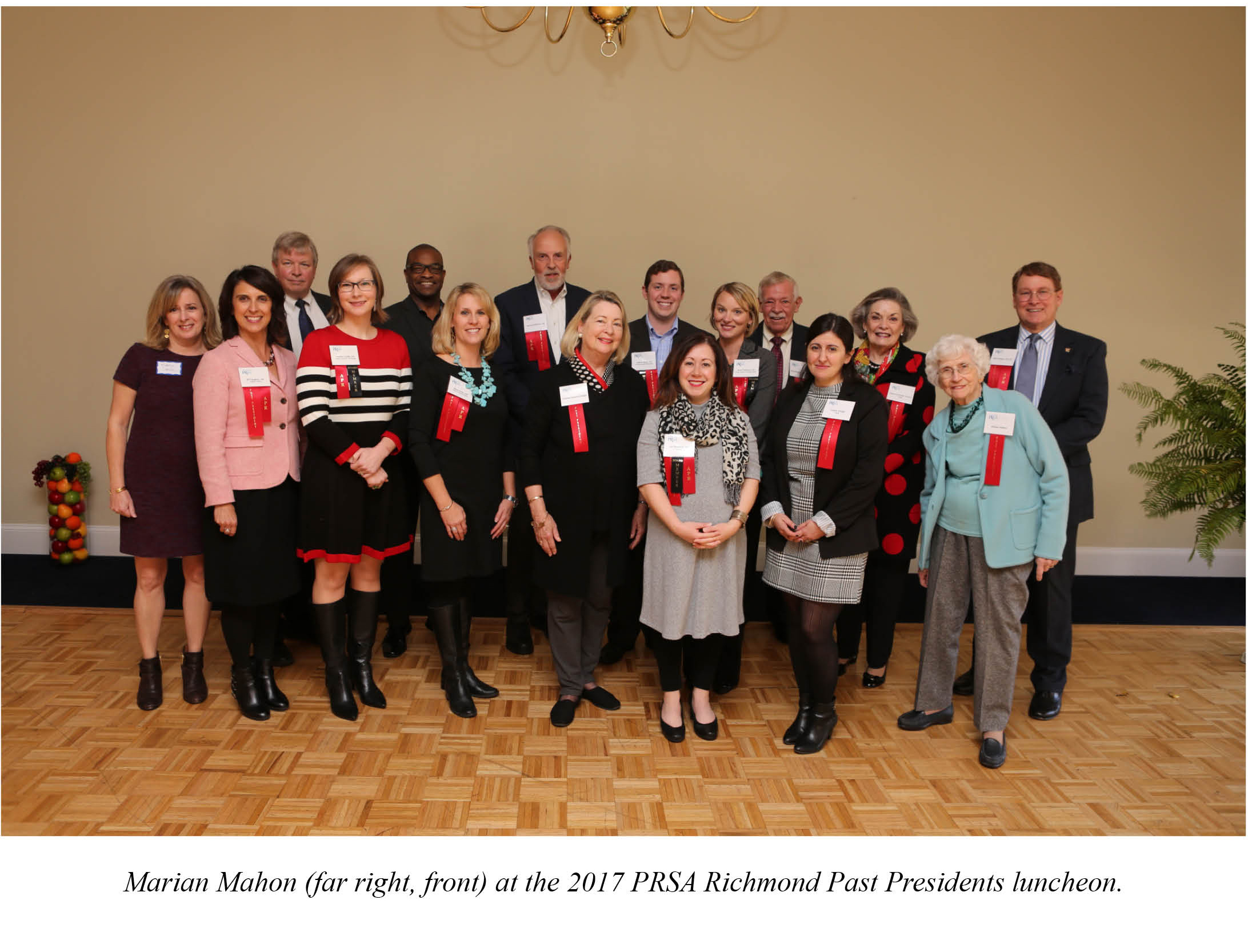 While PRSA Richmond members don’t have to worry about competing against Mahon’s exceptional work at the Virginia Public Relations Awards anymore, you can still catch her at chapter events. Even after retiring from public relations more than 30 years ago, Mahon continues to stay involved with PRSA Richmond. Make sure to say “hello” at the past president’s luncheon this November.