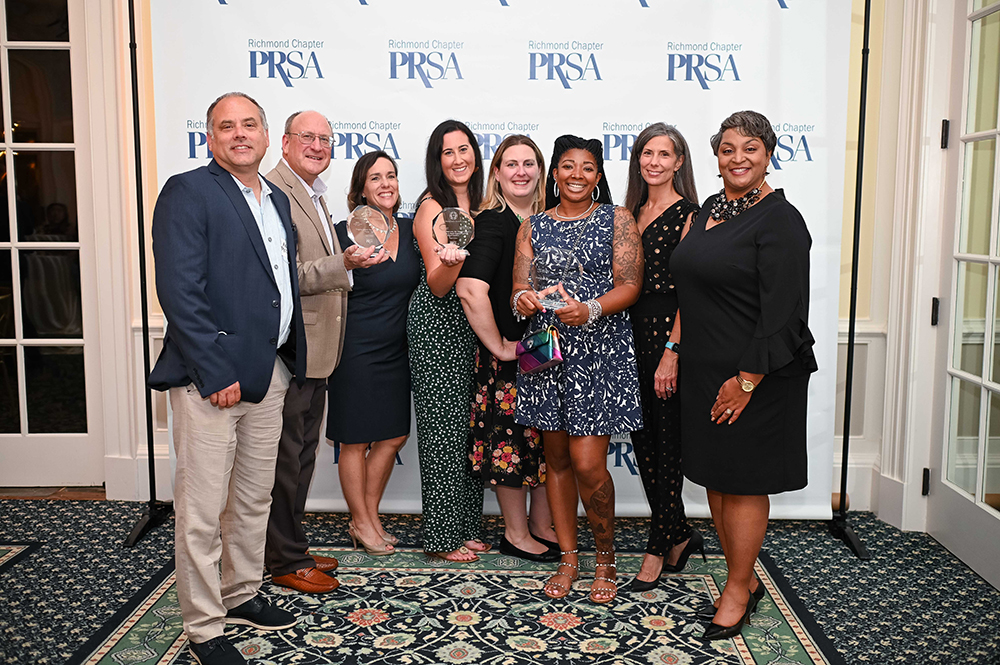 The Richmond Chapter of the Public Relations Society of America (PRSA) celebrated this year’s award-winning public relations work at Lewis Ginter Botanical Garden on Oct. 6. The event also honored the chapter’s individual awards, the Rising Star and the Thomas Jefferson Award for Excellence in Public Relations.

This year’s awards resulted in 102 award winners from more than 35 categories, which were announced during a virtual award ceremony the week of Sept. 20.

“Each year, we look forward to recognizing the incredible work of our colleagues, and we are proud to again recognize the exceptional public relations work from across the Commonwealth,” said Lindsay O’Bar, APR, president of PRSA Richmond and a vice president at The Hodges Partnership. “The awards submissions reflected work completed in 2020, a challenging year for everyone, and I was so inspired by the impactful and important work produced by our profession during this time.”

During the ceremony, PRSA Richmond presented Natalie Smith, APR, with the 2021 Thomas Jefferson Award for Excellence in Public Relations. She is a senior vice president at Padilla where she serves as a sage counselor to numerous regional and national clients and leads the agency’s Employee Engagement Team. She has been an active PRSA member since 1993 and achieved her APR credentials in 1998. She has been a PRSA Richmond officer, including Chapter President and served the Society nationally as a member of the Universal Accreditation Board (UAB). Additionally, Smith has served on numerous nonprofit boards and is a mentor to young PR professionals – especially young mothers.

The Rising Star Award recognizes an outstanding member of the public relations profession with five or fewer years of experience. Hannah Robinson, an account executive with The Hodges Partnership, was selected as the 2021 recipient of the award.

The Virginia Public Relations Awards are separated into two divisions: the Commonwealth Awards, which honor the best public relations programs and campaigns of the year, and the Capital Awards, which honor the best public relations tactics of the year. First-place winners in each category were honored with an Award of Excellence, while runners-up received an Award of Merit. Finally, Best in Show awards were given to the top overall entries in the campaigns and tactics categories.

Best in Show for the Commonwealth Awards was presented to Padilla who won for its work with the Produce for Better Health Foundation, which engaged the firm to create a new campaign to help reverse Americans’ declining fruit and vegetable consumption by maximizing consumer behavior insights and creating innovative engagement opportunities. Within six months of launch, the movement connected with 165 million people through social media, webpage views and media coverage. Reach continued to grow in the past year, to more than 300 million. In addition, the movement has helped drive produce sales and helped increased PBH membership.

Best in Show for the Capital Awards was awarded to Bon Secours Mercy Health for local and regional media relations. The healthcare organization worked to combine creativity and compassion to connect families and patients battling COVID-19. Family members of the hospital’s sickest COVID-19 patients could opt to record a personal message over the phone to be placed into a stuffed animal and played for their loved ones. Media efforts were successful among both local and national news media. In total, the ‘Be There Bears’ story garnered 288 earned media placements and 153 million earned media impressions.

Commonwealth and Capital Award entries were judged by the Georgia Chapter of PRSA.